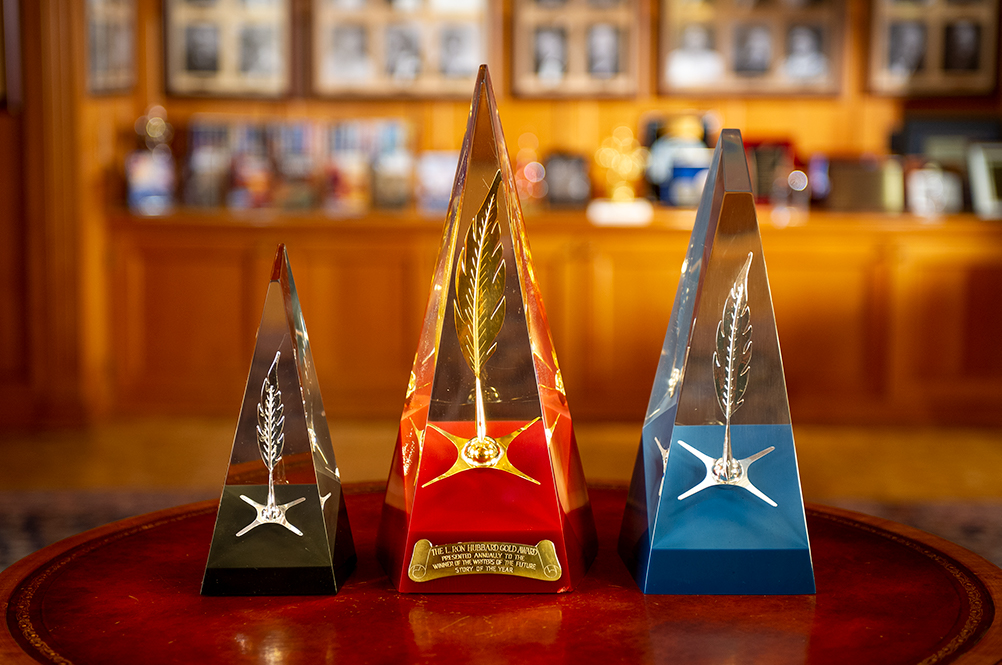 The year 2020 marks the 80th Anniversary of the Golden Pen Award, conceived by author and explorer L. Ron Hubbard in 1940 while on his Alaskan Radio Experimental Expedition flying Explorers Club flag #105 to Ketchikan, AK. The Golden Pen Award was the prize for top story submissions sent to him at the KGBU radio station (now renamed as KTKN).

The ‟Golden Pen Award” followed an already established pattern of providing guidance to new writers, a series of ‟how-to” articles published in several writing magazines in the 1930s. As a feature of his radio program, called the ‟Mail Buoy,” he additionally offered advice for beginning writers and went one step further, initiating the ‟Golden Pen Award” contest to encourage listeners to write fiction, with prizes awarded by L. Ron Hubbard, including an introduction to his New York publishing contacts.

In 1983, as a continuation of a legacy of helping the aspiring writer and in recognition of the increasingly difficult path encountered between the first manuscript and published work, particularly in an era in which publishers devote the lion‘s share of their promotional budgets to a few household names, L. Ron Hubbard ‟initiated a means for new and budding writers to have a chance for their creative efforts to be seen and acknowledged.” He created the Writers of the Future Contest. Now in its 37th year, it has become the most prestigious writing contest of its kind, providing that much needed open door for fledgling writers.

While twelve winners are chosen annually, only one is selected by Contest judges as the grand prize winner of the Golden Pen Award accompanied by a $5,000 check.

A sister competition, Illustrators of the Future, was initiated five years after the creation of the Writing Contest and bestows its Golden Brush Award to one of the twelve annual illustrator winners as the grand prize winner along with a separate $5,000 check.

Throughout the Contests‘ 36-year history, 786 writers and illustrators have been recognized as winners.

Winners Announced: Writers and Illustrators of the Future Contests

How to Become a Writer
Scroll to top