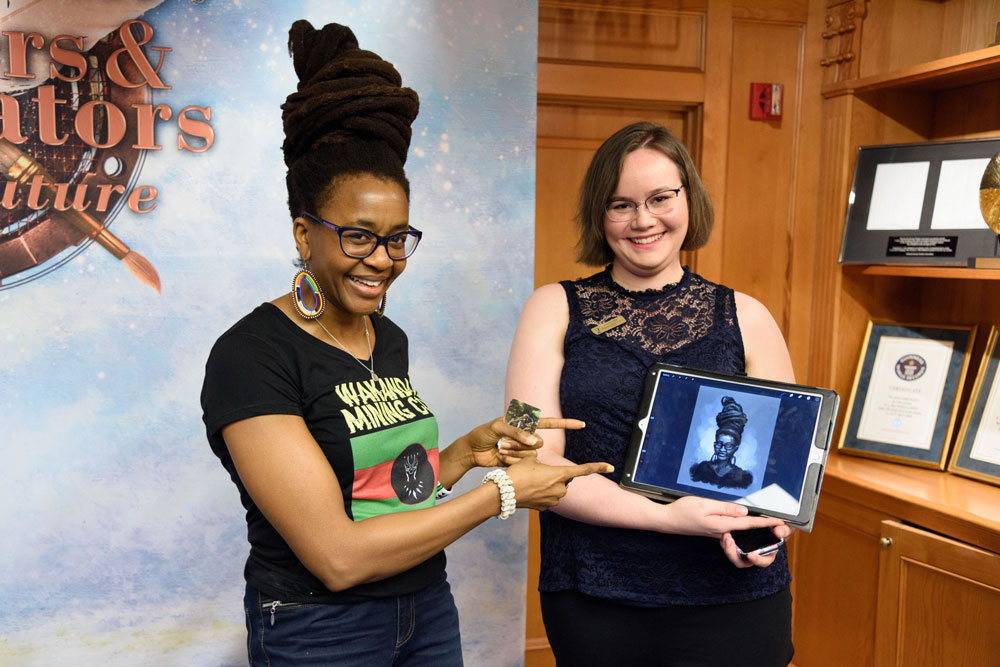 It’s hard to imagine a writer whose career is more on fire right now than Nnedi Okorafor Ph.D. (Binti). Multiple Hugo nominations. Writing Black Panther stories for Marvel and her own series LaGuardia for Dark Horse. A forthcoming HBO fantasy series based on Who Fears Death announced by George R.R. Martin at the 70th Primetime Emmy Awards.

Nnedi spent the morning with our writer winners telling them how she went from a high school track and tennis athlete who’d never even thought about writing fiction to the multi-award winner and NYT Bestseller she is today.

Some writers have known they wanted to write since they were children. Not Okorafor. She discovered her craft by taking a creative writing class in college. It wasn’t long before she was hooked, and this in spite of her instructors actively discouraging her from writing science fiction or fantasy.

Okorafor called it magical realism and kept on writing. Two Masters degrees and one Ph.D. later, no one could tell her what not to write.

Journalism taught Okorafor to write clearly. Her childhood experiences taught her to write vividly and with words that conveyed the wonder of the fantastical. Her family taught her perseverance and that education was paramount.

The combination has led her to produce a body of work that is at once haunting and dreamlike while feeling utterly realistic. To call her a rising star would give the mistaken impression that Dr. Okorafor is a newcomer to the field of speculative fiction. She isn’t.

Okorafor was a rising star in the early 2000s, having published her first short story in 2000, her short story “Windseekers” appeared in Writers of the Future Volume 18 in 2002, and her first novel Zahrah the Windseeker in 2005. Today, she is a blazing comet whose work will light the skies of our imaginations for decades to come.

Promoting Yourself in this Day and Age

The combined workshop for both illustrators and writers continued in the afternoon under the banner of “Promoting Yourself in this Day and Age” given by President Galaxy Press, John Goodwin, and VP Public Affairs, Emily Goodwin, who were joined by special guests.

Hard-won tools were shared and practiced including formulating a message and sticking to it through various media channels such as blogs, Facebook, Twitter, the Writers of the Future Forum. Next up was journalism and how to present yourself and your book and get your message into a news story.

Dave Chesson of Kindlepreneur is an online book marketer. He provided tips on building mailing lists and email marketing and the importance of an author having a relationship with his readers.

And then it was a strategy meeting to coordinate the efforts of all winners and judges to make Writers of the Future Volume 35 a bestseller.

The workshop was followed by a now annual pizza party.

The evening was filled with a radio play inspired performance of L. Ron Hubbard’s sci-fi short “The Idealist.” Idealists generally start revolutions—and either die in them, or are condemned by the men they fought for. The story appears in Writers of the Future Volume 35.

All the winners were sent off with a suitcase full of books, their trophy, and story illustration and marketing materials. After some rest, they’ll be onto book signings and making their new release a bestseller.

The Writers & Illustrators of the Future Gala Awards Ceremony