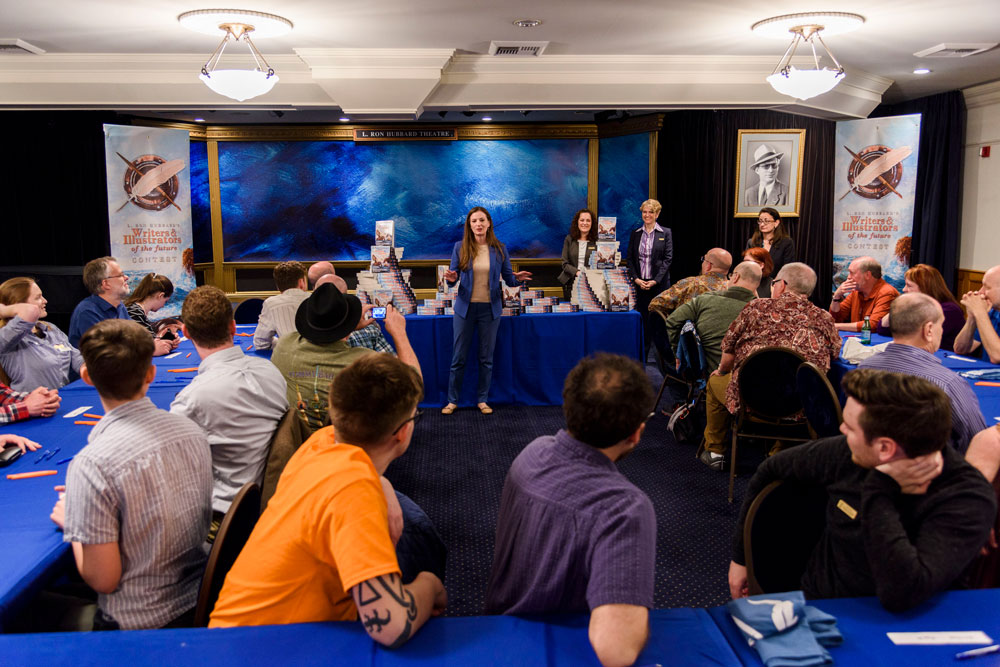 Day 5 of the Writers Workshop was a full day of guest lectures by Contest judges.

The day opened with Kevin J. Anderson (Spine of the Dragon) and Rebecca Moesta (The Young Jedi Knights series) giving their popular and informative talk, “Things I Wish Some Pro Had Told Me When I Was Just Starting Out.” They promised the writers: “We’ve made all the mistakes so you don’t have to.” The talk started with Heinlein’s Rules for Writing, and then shifted to the topic of professionalism and how crucial it is to your career.

Next Dr. Robert J. Sawyer (Quantum Night) joined the class to share a message which arose again throughout the day: there are multiple ways to have a career, not just One True Path.

After Sawyer, lead instructors Orson Scott Card (Ender’s Game), Tim Powers (On Stranger Tides), and David Farland (The Runelords) returned to add their own comments on business processes for writers, and also to lead the writers in a critique group to examine one of the 24-hour stories.

Toward the end of the day, Eric Flint (1632) addressed the writers, reiterating that there is no one way to succeed, and they must learn what works from many writers and then forge their own paths. He also discussed the tools and the limits of promotion, and explained that self-discipline and consistent production can be their most effective promotional tools.

The last guest lecture for today was from Larry Niven (Ringworld), who explained that a writer’s experiences feed their writing. And consciously or unconsciously a writer’s work is informed by that of their predecessors, so it helps to know the history of science fiction.

Contributed by Martin Shoemaker, Writers of the Future winner from WotF 31.

With their final projects moving toward completion, the illustrator winners alternated between studio time and presentations from all-star guest speakers.

Echo and Lazarus kicked off the morning with a presentation on branding, professionalism, and self-promotion, including tips and tricks for how to run a successful Kickstarter. The illustrators worked on their tight drawings, hoping to win final approval to proceed to a finished piece.

Contest judge and former Illustrator winner Sergey Poykarov regaled the illustrators with tales of winning the contest as a young artist from the Soviet Union who spoke no English. Poykarov has gone on to spectacular success as an artist, sculptor and television personality. His message to the illustrators focused on never giving up.

Poykarov is a hard act to follow, but Larry Elmore is the right person for the job. With more than 50 years of experience in the art world, Elmore’s name is synonymous with Dungeons & Dragons, Dragonlance, and SnarfQuest. Elmore is a rarity in an industry increasingly dominated by digital art. He still creates most of his work by hand, using paint, ink, and brushes.

How does it feel to be a grown man who makes a living drawing dragons? Neither Poykarov nor Elmore would trade it for anything.

Writers & Illustrators of the Future Workshop – Day 6
Scroll to top