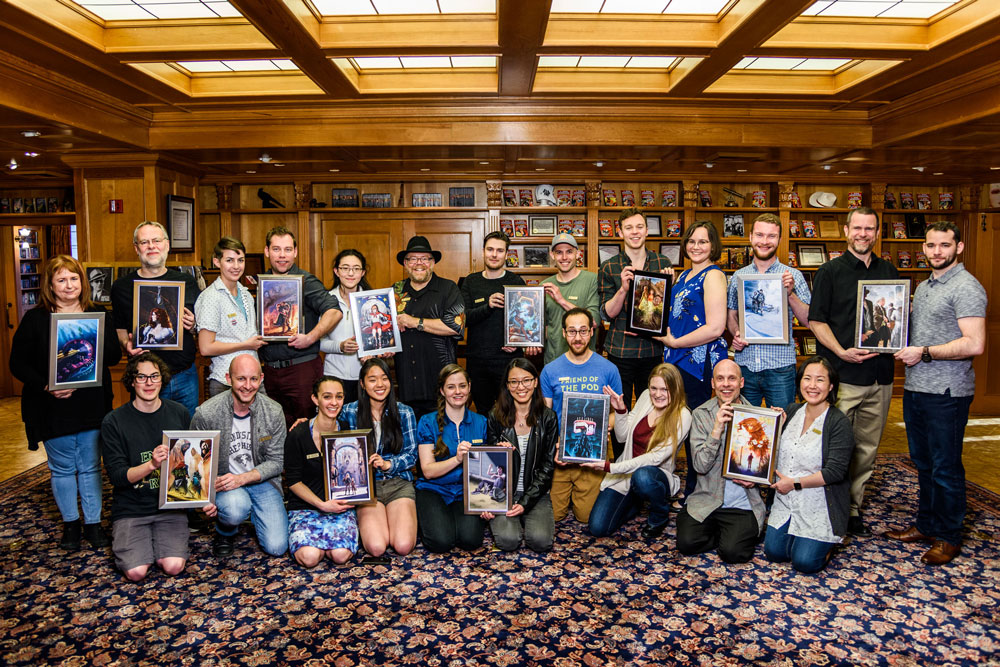 There are 960 minutes from midnight to 4 pm, and the writers felt each one tick by as the clock counted down to the deadline for turning in their 24-hour stories. After a mad rush for printer paper, a stapler and extra staples, the stories landed safely in the hands of Tim Powers (On Stranger Tides), thus freeing the writers to head back to Author Services, Inc. for the big art reveal.

The art reveal is one of the highlights of the workshop, second only to the awards ceremony itself. In many cases, it’s the first meeting between the writers and the illustrators.

Inside the conference room at ASI, the doors are closed. Twelve easels stand in a semicircle, each displaying a single, framed image. The illustrators gather in the back of the room. They’re nervous, too. The illustrations they’ve worked on will determine which one of them wins the Contest’s Golden Brush Award. But it’s more than that. What if the writer can’t tell which illustration is theirs? What if the writer doesn’t like their art?

When the doors open, the writers file in. They’re excited, but silent, too. Some recognize their artwork immediately and go straight to it. Others walk the semi-circle, inspecting each painting. There are gasps, and then, inevitably, there are tears.

Once the writers have found the illustration that goes with their story, the illustrators come forward to introduce themselves. The illustrators share information about their techniques and process, why they chose a certain scene or character, what they wanted to convey with their art.

Nervous silence has given way to excited chatter. This is a moment both the writers and the illustrators will remember for the rest of their lives.

The illustrators started their morning with a lesson from Echo and Lazarus on how to find clients—an important topic for any artist who wants to make a living from their work. After that, the illustrators selected one image from their nine thumbnails to develop into a tight drawing. If the instructors approve their work, they’ll turn this image into a finished illustration.

Maryse Alexander, Creative Director for Author Services, Inc., visited the workshop for a presentation on color theory. She showed the illustrators how to use color to evoke an emotional response in the viewer, to achieve depth and create a focal point in their work.

Val Lakey Lindahn, a professional illustrator for more than 30 years, talked to the illustrators about the importance of models and costumes for accurate painting and lighting. Val is a sculptor as well as a two-dimensional illustrator, and if she can’t find a suitable model for a project, she’ll sculpt or assemble one out of things like bones, found objects and clay.

After their lunch break, the illustrators spent more time in the studio, collecting references for their drawings, shooting photos where needed, and making progress on their in-class projects.

The big art reveal is a different experience for the illustrators. Most of them have never worked directly with an author before, and some have never worked for a client who isn’t an instructor. They’re not sure what to expect. In the art world, sometimes approval is limited to “good job, here’s your check.”

For the illustrators, the big reveal is nerve-wracking. What if the author doesn’t like the art?

When they see the writers respond, they’re baffled at first. They’ve never heard someone gush over their work like the writers do, and they’ve never seen someone moved to tears by their artwork before.

Writers & Illustrators of the Future Workshop – Day 5
Scroll to top