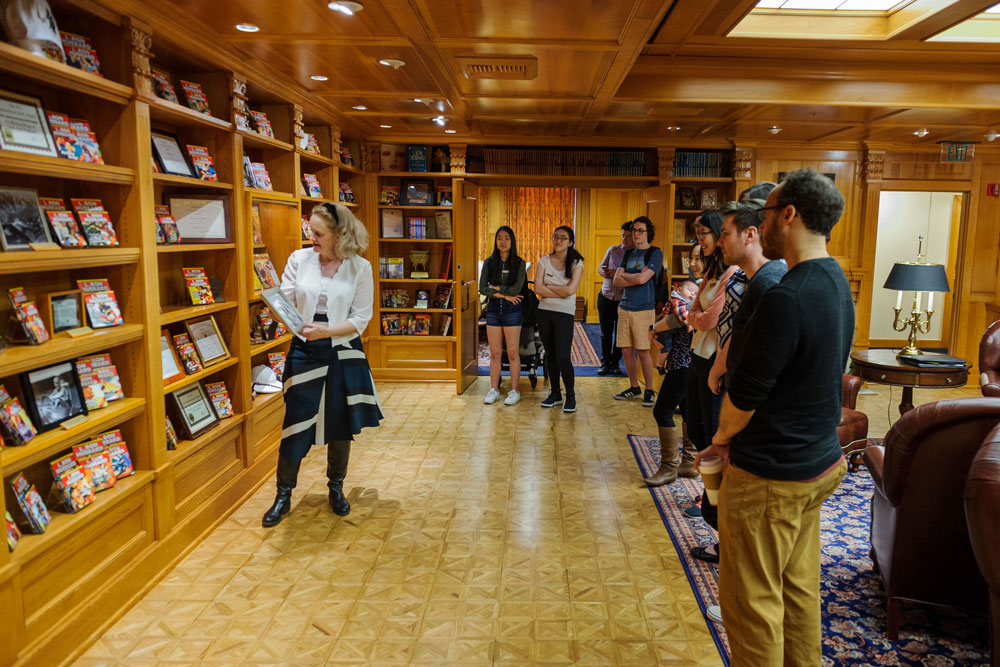 David Farland (The Runelords) opened Day 3 of the writers’ workshop with a discussion of short story markets, when to use pen names, and the financial realities of writing fiction for a living.

Orson Scott Card (Ender’s Game) warned the writers to steer clear of politics in their public and professional personas. In addition to alienating potential fans and readers, publishers and editors could have concerns about the author’s politics having a negative impact on sales.

Continuing on the theme of sales, David Farland talked about career arcs in traditional publishing. Ideally, an author sells their debut novel, proceeds to mid-list and lead author status, then reaches the lofty pinnacle of having multiple New York Times bestsellers.

With the 24-hour story looming, the instructors touched on the following:

Our trio of famous authors finished the morning with a discussion of Hollywood and movie deals.

After lunch, the writers embarked on their 24-hour story. First, they visited a library for short story prompts from random books pulled off shelves, then they hit the streets of Hollywood to interview a stranger. After yesterday’s discussion of using details for realism in fiction and short stories, the writers should be well-equipped for their challenge.

The clock started ticking at 4 pm, giving writers just 24 hours to draft a complete short story inspired by a random item, random information from the library, and their interview with a stranger.

Coffee’s brewing, words are flying, and the sun is setting on a long night of writing.

Day 2 of the Illustrators of the Future Workshop kicked off with a tour of Author Services, showcasing book covers, illustrations, paintings, graphic novels and other fantasy and sci-fi art produced by previous contest winners.

The instructors introduced the illustrators to the difference between commercial and fine art, covering contracts, the creative process, delivery and payment, and how to communicate with everyone from indie authors to game designers to art directors and CEOs.

The illustrators wanted to know more about where to advertise their art and which venues gave the best value.

Echo and Lazarus talked about the financial realities of starting out as a freelance artist, chuckling about the idea that you only have to work half-days, and you even get to pick which 12 hours those are. Since we’re talking science fiction and fantasy art, those might not be Earth days, either!

The illustrator judges wrapped up the day with an assignment: the illustrators have until tomorrow to turn in nine thumbnails, small sketches designed to test concepts before moving forward with a finished piece.

After dinner, the illustrators returned for a live drawing session featuring models in sci-fi and fantasy costumes. Some drew with traditional media such as ink and charcoal, while others drew on laptops and tablets. Echo brought out her brand new Staedtler blues and joined in!

Writers and Illustrators of the Future
Hmmmm.
Hmmmm.
View Photo
View on Facebook

Writers and Illustrators of the Future
Ready...
Ready...
View Photo
View on Facebook

Writers and Illustrators of the Future
Set...
Set...
View Photo
View on Facebook

Writers and Illustrators of the Future
Go!
Go!
View Photo
View on Facebook

Writers & Illustrators of the Future Workshop – Day 4
Scroll to top