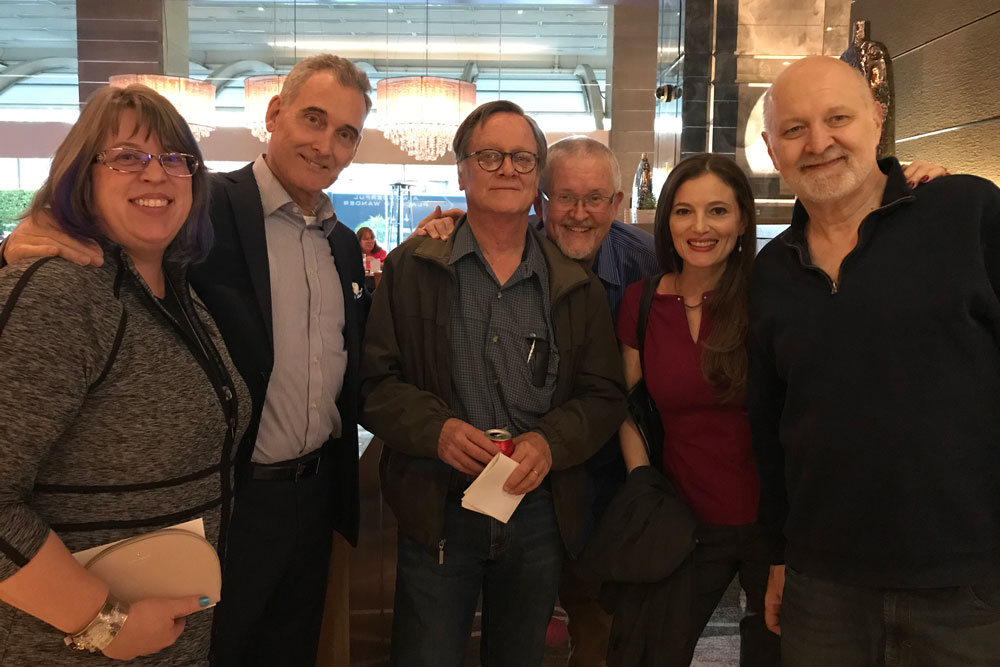 The excitement has begun. It’s the Writers & Illustrators of the Future annual week of workshops and the gala awards event. The big show will be on Friday, April 5 at the Taglyan Complex. See it live at www.WritersoftheFuture.com.

This year’s workshops are being held at the Loews Hollywood Hotel. The writer winners arrived today and met up for the first time. Christopher Baker and David Cleden came in to Hollywood from 30 miles south of London. John Haas arrived from Ottawa. The other nine US-based winners flew in from as far as Washington, DC (Andrew Dykstal) and as close as Reseda, which is only 14 miles away (Preston Dennett).

The writers arrived and checked into the hotel.  And as a lead up to the official start of the writer workshop, they were interviewed for a series of WotF podcasts and videos all of which will be posted on Facebook and Youtube to promote themselves, their stories, the Contest and the latest Writers of the Future anthology to be released on Friday (and nationwide on April 9).

The writers hit the ground running, heading straight into introductions, orientation, and their first assignment.

Taught by sci-fi and fantasy greats, Tim Powers, David Farland, and Orson Scott Card, the workshop offers a combination of craft, business, and marketing skills aimed at taking the writers’ careers to the next level. Once introductions were out of the way, the three judges discussed nuances of style and voice.

Tim Powers gave the class an overview of the 24-hour story coming up on Day 3, and writers met their “twins,” their writing partners for the duration of the workshop.

Finally, the instructors handed out schedules and workbooks, and gave the writers their first homework assignment—two reading selections about the nature of stories and storytelling.

We’ll catch up with them tomorrow for Day 2.

Writers & Illustrators of the Future Workshop – Day 2
Scroll to top