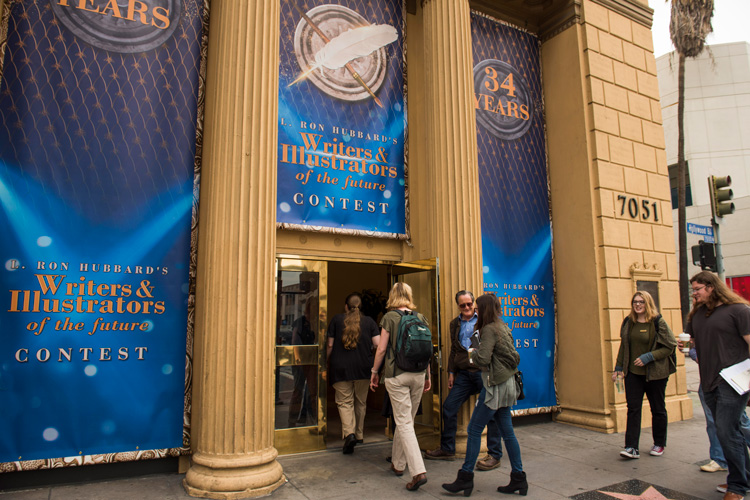 Today the 2018 Writer Winners got into full swing with a day of instruction by David Farland and Tim Powers, along with practical assignments. Then the authors were sent off at 5:00 p.m. to write their 24-hour story.

What sets this Writing Workshop apart from others is that everyone attending is already a writer and a very good writer at that (evidenced by the fact that their stories won out over thousands of other stories submitted to the Contest). In fact, both instructors agreed that within the year, many of the winners attending will have gone on to publish one or more stories and many will begin garnering awards for their efforts.

So if they already know how to write, what is the point of holding a Writers Workshop?

Both David Farland and Tim Powers, award-winning and bestselling authors in their own right, know the biggest barrier for a writer is breaking what they call the artificial speed barrier that can be the make-break point between dreaming and being a successful author.

As Farland described it, back in the early 1950s no runner had broken the 4-minute mile. In fact, it was commonly held to be impossible, with many athletes believing it couldn’t physically be done without the runner’s lungs bursting. That is, until 1954 when the first runner, Roger Bannister, broke it. And since then it has become the standard for all male professional middle distance runners.

David likens the process of writing a story in 24-hours to breaking the speed barrier for a new author. So this is the challenge each Writer winner is given at the end of today’s Workshop.

But as professional authors, David and Tim don’t just throw out the challenge without also providing the means of how to do it, and how to do it successfully. This is covered in detail in the “Story Ideas, Where They Come From” section of the Workshop.  Advice our authors readily took in.

While the writers may be feeling the pressure and a bit anxious, Farland remarked that he only remembers 1 writer in the last 15 years who didn’t complete their story. In fact, many go on to sell the tales, as in the case of Tim Napper (WotF Vol 31). He wrote the short story “Flame Trees” in the writing workshop and not only sold it, but it was nominated for a Ditmar Award.

As Farland put it, “These are great writers, but many of them have never been tutored by a professional writer. As a college student, I was taught mainly by non-writers. My professors told you to ‘wait for inspiration from the muse.’ But in this workshop, we teach the authors how to hunt her down in her lair. In college, we were given weeks to write a simple short story, but in this class we will ask you to do it in a day. It isn’t hard, and I want our authors to begin stretching their literary legs, to learn just what amazing things they can accomplish!”

So, looking forward to tomorrow and reading the great tales the Class of 2018 are producing.

What a fantastic first day for our artist winners!

Workshop instructors Echo and Lazarus Chernik filled them with so much information about the business end of illustration as a career from 8:00 a.m. (Lazarus a self-confessed tyrant for starting so early) until 11:00 and then a well-deserved break to process it all.

During the week we’ll have guest speakers such as Larry Elmore, Rob Prior,  Sergey Poyarkov, Jeff Snow, Ven Locklear as well as myself talk to the winners. Today was my turn. In addition to showing my 40 years of art (in less than 5 minutes) I passed along my tips and techniques for creating props (nothing was sacred in my son’s arsenal of toys), lighting and taking reference photos for illustrating.

In the afternoon, after the winners shared their portfolios with everyone, Echo and Lazarus dived in on the subject in detail, including help and advice on how best to arrange them, including how to attract specific clients and where to put your strongest pieces. A key tool for any artist.

We have some returning winners, Bea Jackson 2008, and Dustin Panzino winner from 2011 who encouraged Jazmen Richardson—one of this year’s winners—to enter the Contest and she won. Dustin commented, “The quality of the art has really gone up in the portfolios!” And I agree. It is the best I’ve seen in my 30 years serving as a judge.

One of my favorite parts of the Workshop is the Salon featuring professional models dressed in fantastic costumes and makeup. Tonight the salon was decked out with large spiders, skulls, a jawbone and other props artfully arranged around the models in keeping with this year’s “Magical Wizard’s” theme. For a few hours, the Workshop was transformed into a terrific temporary studio for all the artists.

End of a long day with the artists returning to the hotel to review their homework—more about that tomorrow!

Writers & Illustrators of the Future Workshop – Day 3
Scroll to top